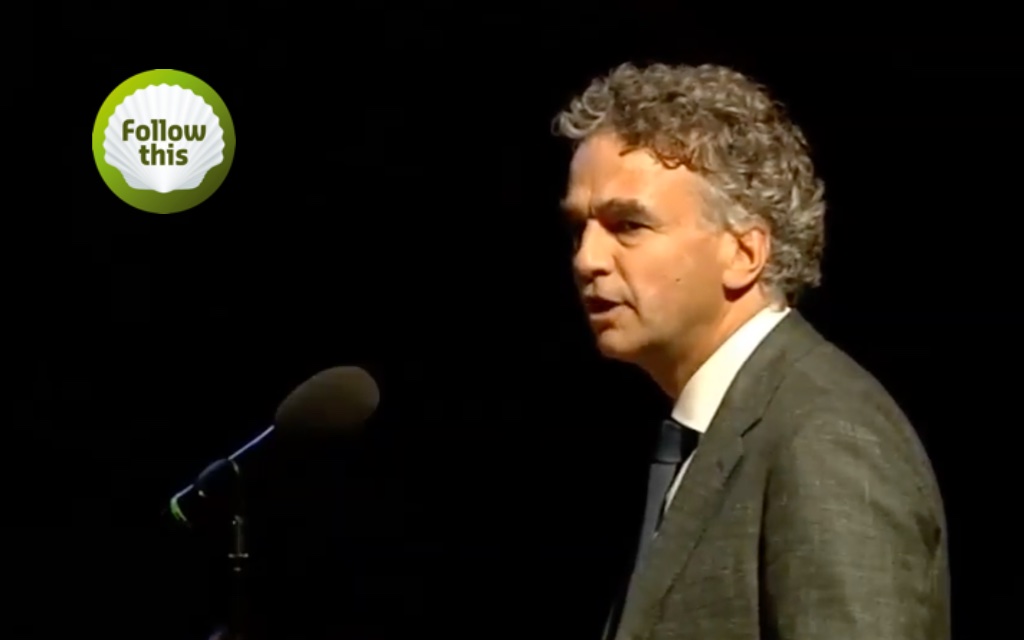 Good to see you again. Today is an important day, not just for Shell, not even for the entire oil industry, but for the world at large. Today investors will show if they mean business about climate change.

Three years ago we stood here at the AGM on behalf of a few hundred shareholders. Our conviction was that Shell – arguably the most innovative company in the oil industry – would take leadership in the energy transition. We believed that you only needed shareholder support to do so. We started organizing shareholder support. Our preference still is to this together with Shell’s management.

We saw a benefit for the company and an imperative for its shareholders. To quote Aegon, one of the biggest investors voting for the climate resolution today: “Shell has enough skilled personnel and innovative power to achieve this goal.”

Thanks to all the investors who supported our resolution in 2017 – for example: Achmea, Actiam, MN, and VLK – Shell has changed course. In November, the company made an industry-leading announcement, in response to shareholders’ support for the climate resolution in 2017. We applauded your net carbon footprint ambition.

With that you accept responsibility for the emissions of your customers, the so-called Scope 3 emissions – also, until recently, intensely debated. We hope that all the investors who voted against the resolution last year, because they assumed Scope 3 was simply outside Shell’s responsibility – Robeco, for example, and APG – will now vote for this year’s resolution.

By accepting responsibility for Scope 3 emissions, Shell has shown a measure of realism in understanding the problem we all face.

But the unanimous rejection of this climate resolution by the Board demonstrates a clear lack of realism in what we need to do to address this issue seriously.

Fellow shareholders, Shell still needs more support to take meaningful action. The resolution asks for no more and no less than a commitment to achieving the goal of the Paris agreement.

Shell’s current ambitions (20% emission reduction by 2035, 50% by 2050) effectively allow the company to continue business as usual for decades.

Apparently not one single director of the, perhaps, soon-to-be biggest oil company in the world can imagine a future energy mix without oil and gas in this century.

This is not what the world’s investors want. Shell’s ambition is to follow society. The climate resolution asks for more – for leadership.

Investors, publicly and in the media, are asking the oil industry to come clean / to make “concrete commitments”. Last Friday no fewer than 60 of the biggest global investors and asset managers – many are present today – published an open letter in the Financial Times.

They called on all companies to explain how the investments they make today (25 billion in the case of Shell) are compatible and consistent with a pathway towards the Paris goal.

Shell makes 2 main arguments against this resolution in the Dutch business newspaper Financieele Dagblad last Friday. Its first argument is that Shell’s net carbon footprint ambition is “more progressive” than what the resolution asks for. This is not true, Mr. Chairman, fellow shareholders.

So since the first argument is not true (Shell is not already more progressive than the resolution) we’re left with the second: Shell’s directors ask – and I quote the directors – for “flexibility to thrive in whatever world society moves towards”.

Shell is asking investors to back a follower, not a leader.

Let’s be honest. With the words “whatever world” directors ask us to consider a scenario in which the goal of the Paris Climate Agreement will not be met – a scenario of catastrophic climate change.

More and more investors find this morally and financially unacceptable. Let me quote:

“We consider it very important that the goals of Paris are actually achieved – in the interests both of society and of our clients. It is important that the investments that we make with their pension money are free of climate risks.”

“We support this resolution because Shell has not yet set out any specific goals to make the transition from fossil fuels to renewable energy as short as possible.”

“The position we take in supporting the Follow This resolution is based on our belief that we need targets across the whole oil and gas sector and not just at Shell.”

Whatever happens today, investors are sending a clear signal to Shell and to all oil and gas companies that their owners will not accept an ambition just to halve, in relative terms, the carbon footprint by 2050.

And yet Shell’s directors are still inventing arguments against this third climate resolution.

Beyond any room for doubt, the world’s most important investors have asked for concrete commitments on a pathway to the Paris goal.

Today investors will show if they prefer Shell’s flexible whatever world – whatever world society moves towards, or a world that takes action to limit global warming to well below 2°C,

a world where all companies set meaningful climate targets,especially oil majors with the resources and the brainpower to make or break the Paris Agreement.

You have our support.

Think Different and Just Do It!