Imagine Shell putting its brains and billions behind renewables 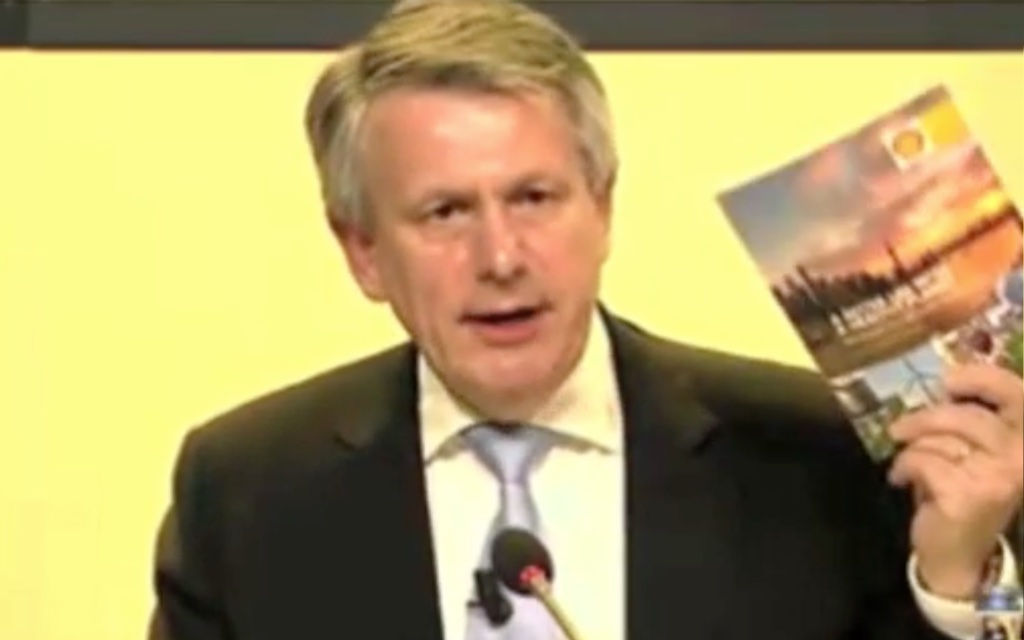 View or read Follow This’ statement and Shell’s response at the shareholder meeting of Shell on May 24th 2016.

Good afternoon fellow shareholders, my name is Mark van Baal of Follow This, a movement of 1,600 green shareholders in Shell. We believe Shell can change the world by putting its brains and billions behind renewables.
Today shareholders will talk about a lot of issues: earthquakes, climate change, the oil price, your reappointments en your remunerations. We want to ask you a question about what is really at stake today:

The end of the fossil era and how you are going to deal with it.
Production costs have tripled in the past decade, because fossil fuels are getting more and more expensive to get out of the earth. Meanwhile the alternative, renewable energy, is getting cheaper.
These two simple facts lead to one simple conclusion:

Shell has to become a renewable energy company by investing the profits from fossil fuels in renewable energy, as worded in resolution #19.
In the past year we have applauded your decisions to acknowledging the end of the fossil area:

Fellow shareholders, according to Carbon Tracker, a think tank of British bankers, Shell runs the risk of losing 77 billion dollars in stranded assets in the next 10 years.

Mr. Van Beurden, you have made these good decisions. In resolution #19 we ask you to make one more decision: express the ambition to become a renewable energy company by investing the profits from fossil fuels in renewable energy.

Let me emphasize: after paying dividends (we are here with over 70 green shareholders, and we want to make it out alive). We are convinced that investing in renewables is the only way to sustain your dividend policy in the long run.

And invest the cash flow thus made available in exploring new business models with renewable energy. The technology is not only out there, it’s getting cheaper and cheaper. The challenge is in finding the business models.

The only decision we ask in resolution 19 is to start investing in renewables. Everything else is up to Shell’s management, Future Energy Team, Scenarios Team, and 90,000 intelligent employees.
You are a good company. You can be a great company.

Imagine the diversification in renewable business models you can create. Today you have tied your hands to one thing: the oil price. You can instead spread your risks over a number of new business models: solar in Sahara, offshore wind in the North Sea, electric mobility, large-scale energy storage – the possibilities are endless.

Finally, imagine what will happen to the brand value of a company with a clear zero-emission goal. We are convinced that setting a zero-emission goal will distinguish Shell from its competitors, because customers will know that the profits from Shell’s fossil fuels will be invested in renewables.
Mr. Van Beurden, pump up all you can (an unfairly vilified quote), but do not add more potential stranded assets (again: 77 billion is at risk).
Please explore new sustainable business models instead of more oil and gas.

To illustrate that we do not ask something unrealistic, let me finish with two more quotes. First Ben Van Beurden’s quote: “An organisation that has so many qualities, so much expertise, so much capital, has to be able to reinvent itself.” We fully agree.
The second is a quote of Marjan van Loon (President of Shell in The Netherlands) in the Dutch newspaper NRC Handelsblad last Saturday about becoming a renewable energy company in 2030 or 2035: “That dot on the horizon is in principle the same for everyone. We all share the same goal.”
Today can be a historic day: the day shareholders support Shell to change course by voting for resolution #19.

Dear Mr. Van Beurden, dear members of the board, we believe you can change the world by putting Shell’s brains and billions behind renewables. And we want you to prevent our shares from becoming worthless in the next decades.
You have our support in being part of the solution, in taking the lead. We want or be proud of Shell.

You can change the world. Our question is: what are you waiting for?