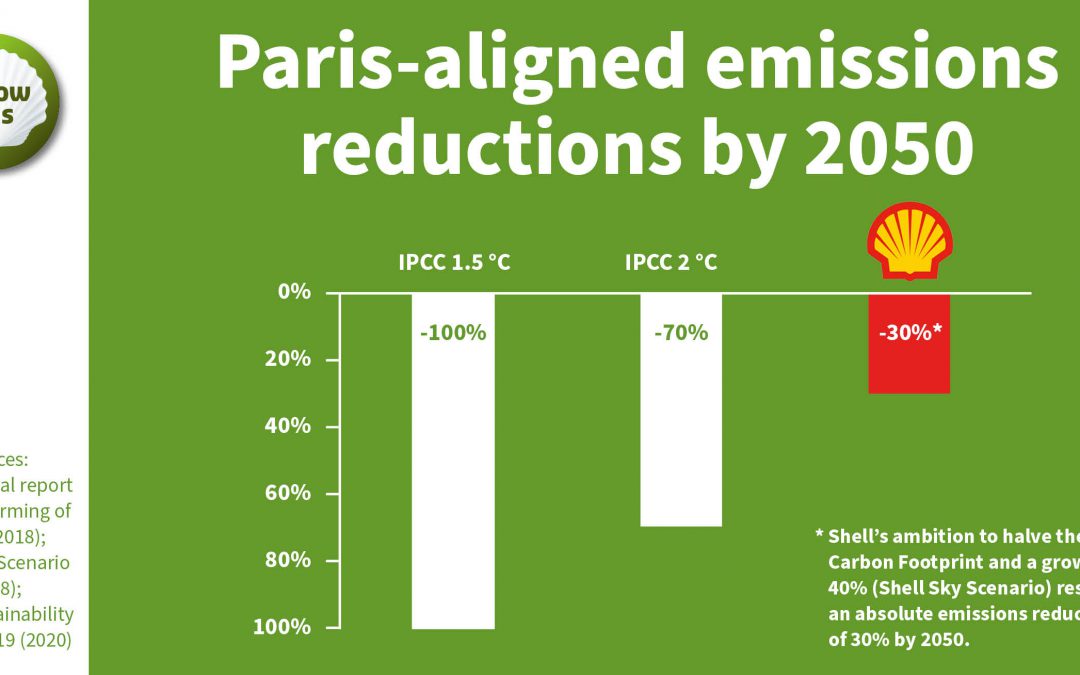 Why your votes matter

This email briefing is intended to help shareholders make an informed voting decision on the climate targets resolution at Shell’s AGM on 19 May 2020.

Our resolution supports Shell to bring its emissions targets (Scopes 1, 2, and 3) in line with the goal of the Paris Climate Agreement to limit global warming to well below 2°C.

Our 2020 resolution repeats the substance of previous Follow This resolutions in 2017 and 2018.

In 2019, with support from the ‘Supporting Six’ group of Dutch institutional investors, Follow This withdrew its climate resolution in order to extend a grace period of one year for Shell to demonstrate progress in advancing its climate ambition to targets in line with “the lower-2°C pathway of the IPCC”.

Since 2017, Shell’s ambition has remained unchanged and remains unaligned with IPCC guidance.

A vote for the Follow This climate resolution will send a strong signal to Shell and other oil majors that institutional investors mean business about stopping climate change. Management requires unambiguous support from shareholders to align its targets with the Paris Agreement and to invest accordingly.

A vote against the climate targets resolutions will in effect legitimize the inadequate targets of Shell and most oil majors, and deny management the support to shift capital investment from fossil fuels. The current capital spending forecasts of Shell are incompatible with the goals of the Paris Climate Agreement

A growing body of investor opinion accepts a fiduciary duty to stop the devastating effects of climate change. On April 3rd this year, proxy advisors ISS and Glass Lewis recommended that shareholders vote FOR the same climate targets resolution at Santos, Australia’s second-biggest oil company. In view of this important signal to shareholders, Follow This expects that ISS and Glass Lewis will act consistently by asking shareholders to vote in favour of our climate targets resolutions at Shell.

On November 28, 2017, Shell announced its industry-leading Net Carbon Footprint ambition for all emissions, including Scope 3 emissions from its products. This made Shell the first oil major to declare an “ambition” – though still not a target, and not in line with Paris – for emissions reductions in all categories.  Shell’s U-turn followed support from a minority of visionary shareholders for Follow This climate resolutions, despite advice from management which had previously rejected Scope 3 targets as “unreasonable” (directors’ response).

A year after the announcement of the Net Carbon Footprint ambition, on December 3, 2018, Shell published a joint statement with Climate Action 100+, an alliance of institutional investors in the world’s most polluting companies. The joint announcement re-stated Shell’s 2017 climate ambition and added detail on two points. First, Shell would translate its (insufficient) long-term ambition into (insufficient) short-term targets. Second, Shell would postpone setting further climate ambitions aligned with  Paris until after 2022.

In 2019, Follow This agreed with six of the ten biggest Dutch institutional investors* to allow Shell a grace period of one year to set targets that are in line with “the lower-2°C pathway of the IPCC” (see statement: investor’s expectations of oil and gas companies – attached). To clarify the emissions reductions this pathway requires, Follow This included the median of the lower-2°C pathway group (70% by 2050) in the supporting statement of its 2020 resolution. Accordingly, Follow This withdrew its resolution in 2019.

* The Supporting Six who voted for Follow This climate targets resolutions in recent years are Actiam, Achmea, Aegon, MN (for PME and PMT), NN-IP, and Van Lanschot Kempen.

On 7 April 2020, Shell published its Sustainability Report 2019. In this report, three observations about Shell’s climate ambitions stand out: